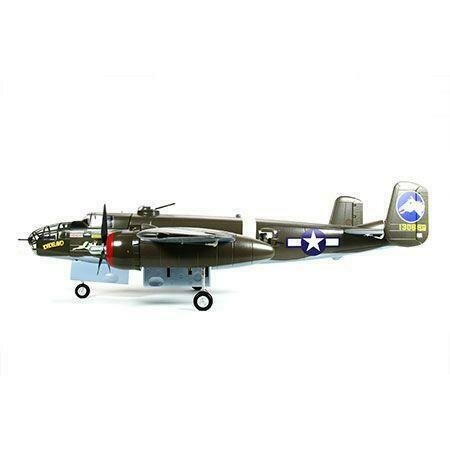 SKU 00110
$299.99
In stock
1
Product Details
The North American B-25 Mitchell was a twin-engine medium bomber that served in every theatre of WW2. The aircraft was safe and forgiving to fly and featured a formidable array of firepower. It was also used to strike the first ever bomber attack on mainland Japan that boosted morale of the American war machine after the devastation caused by the attack at Pearl Harbor. FMS has chosen the B-25D which featured upgraded supercharge radial engines and increased armament and first flew in January 1942. This is a highly detailed and feature rich model which includes: 5 painted pilots, 11 machine guns, high power LED Navigational lights, and worm drive retracts with gear door sequence controller. Taxiing and ground handling is great using the steerable nose wheel and makes for stress free take offs. Once in the air, all control surfaces are very effective and coupled to the light wing loading and excellent power to make this a winning package. Confidence-inspiring flight predictability will enable any budding twin-enthusiastic pilot to really push the flight envelope and wring this aircraft out. At the same time it's a walk in the park to bring it back down for a beautiful scale landing, all this without the use of flaps!

What's in the box?


Save this product for later